For #T-TeC we need a concrete approach:
says Luca Andolfi, 2020 winner of our Open Innovation contest

Feasibility, attention to user needs, the evaluation of risks and costs: in short, a concrete approach. Luca Andolfi, winner of #T-TeC 2020 and now working in the Telespazio ITG group, tells us what you need to turn your ideas into a start-up!

Born in Naples 26 years ago, Luca Andolfi is an aerospace engineer. A graduate of the Federico II University in Naples, he is passionate about space exploration and enthusiastic about researching high-tech solutions to tackle the daily challenges presented by the sector.

For over a year he has been working in the Telespazio's Innovation & Technology Group (ITG). This is a natural progression for Luca, having in 2020 won first prize in the second edition of #T-TeC, the Leonardo and Telespazio Open Innovation contest aimed at young STEM subject students throughout the world.

We had a brief chat with Luca, who talked to us about a career path combining innovation, the Moon and Mars, and also gave some advice to the young people preparing to enter the contest.

I studied aerospace engineering: space and technology are two of my biggest passions. At university I was therefore able to study subjects in depth like orbital dynamics and space mission design. And it was precisely thanks to a project developed during the Space Mission Design course that I and my fellow students, on the suggestion of our professor, took part in #T-TeC 2020. The Federico II University is always ready to encourage its students to take part in contests and initiatives of that kind, and didn’t let this important opportunity go to waste: we reworked a part of the project, called MATES, and threw ourselves into the contest.

Tell us about the MATES project.

MATES stands for MArs TElecommunication System. As its name suggests, the objective was to develop a system able to provide a telecommunications service around the red planet, following the approach actually used in the phases of a European project. In particular, we hypothesised a constellation of four equatorial satellites orbiting Mars with the objective of supporting future institutional and commercial missions.

Now that a couple of years have gone by, what do you think were the strengths that enabled MATES to win?

I think its strength lay in its particular focus on the needs of possible mission users and on the service that the system would provide. The multidisciplinary approach we used also enabled us to address aspects that are often overlooked at university level: those related to costs and risks, which were the key starting points in strengthening the feasibility of our proposal. I think this made all the difference. 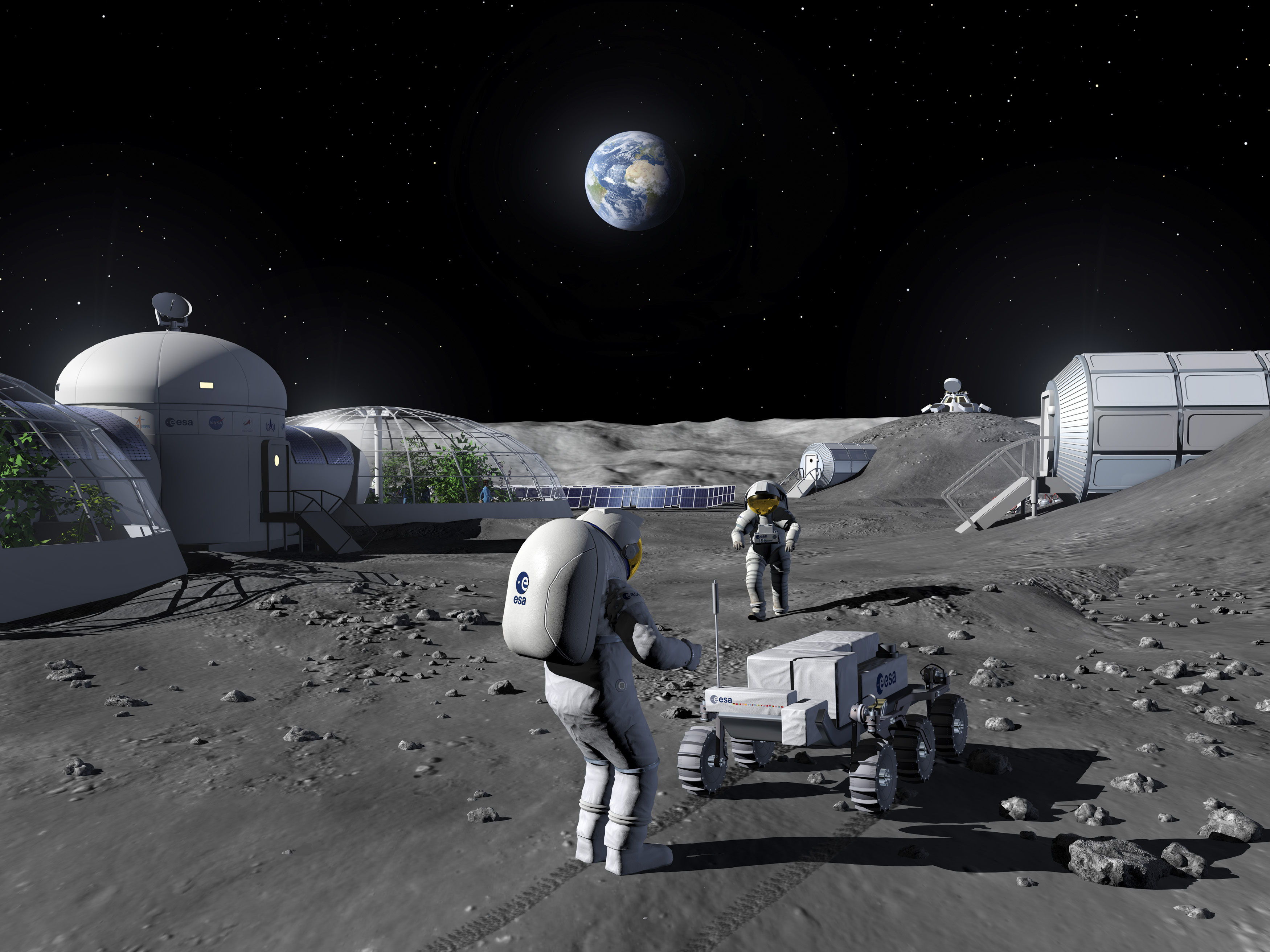 You’ve been working in the Telespazio Innovation & Technology Group (ITG) for a year now; can you tell us what projects you’re working on?

From my very first day I’ve been involved in the ambitious Moonlight project launched by the European Space Agency (ESA), which is planning the creation of Lunar Communication and Navigation Services (LCNS) on the Moon itself to support future institutional and commercial missions. For Moonlight Telespazio is the leader of a major international consortium, and the ITG has the role of Design Authority. I’ve therefore been following various aspects of the project, from defining mission and system requirements to studying critical technologies related to the system. I’ve also been involved in PULSAR, which focuses on investigating state-of-the-art navigation technologies underwater. We’re now working on an important demonstration mission in one of the most important sectors for sustainability in the space sector: In-Orbit Servicing.

Within MATES you were involved in communications for Mars, now you’re working on those for the Moon. That's a lot of continuity! Are there any differences?

MATES and Moonlight undoubtedly have some aspects in common, but also many differences. The main difference is that - unlike in Moonlight - with MATES we only worked on the communication service and not navigation services as well. As a result, all processes to analyse the needs of users and business cover different aspects. There’s also a big difference in their duration: with Moonlight I’ve been able to go into more detail dealing with some aspects that were only touched upon during the development of MATES, as well as some aspects that were completely unknown to me. It has been fascinating to be able to recognise these similarities and, at the same time, to broaden my knowledge and skills.

In moving between university and working at Telespazio, what aspects struck you most? What did you have to learn quickly?

The main difference, in my opinion, is the central focus on customers and stakeholders that distinguishes the world of industry. This aspect is rarely addressed at university, but I have to say it was thanks precisely to the Space Mission Design course I mentioned that I rapidly learnt to understand what the key aspects of a space mission are in addition to the more technical ones. I think that a course like Space Mission Design is a very important and outstanding resource, since it gives you an idea of how a European project is actually managed within a large industrial business like Telespazio.

In 2022 “Moonlight” won the Telespazio Innovation Award! Winning prizes is all you do! Apart from the compliments, how important is the theme of innovation for a company like Telespazio?

Innovation plays a fundamental role within a company, also because we’ve seen a large number of start-ups being launched in the past few years. Some of these have become established businesses, offering disruptive products and revolutionising our way of thinking about space missions. In a company like Telespazio, innovation therefore plays an active part in several processes and is encouraged by the inclusion of new young colleagues. Thanks to their passion and the experience of their more expert colleagues, it’s always possible to look ahead and to think up new and increasingly efficient solutions. I’d also like to add a personal experience of my own. During my studies I had the chance to take part in the first Leonardo Aerotech Academy. This takes place every year at the Aerotech Campus in Pomigliano d’Arco and is part of the Leonardo Labs network, the company's technological innovation laboratories. This was a very important experience for me, since the Leonardo Labs are one of the centres of innovation for materials and production processes across the entire Group.

The deadline for joining the 2022 edition of the contest, set for 27 November, is getting closer. Do you have any advice you’d like to give to the participants of #T-TeC 2022?

Obviously focus on originality and paying attention to user needs, but I’d also say work above all on the feasibility of the proposal, a necessary element to show that an innovative idea doesn’t have to be only confined to paper. Not least because this year's #T-TeC is also a real incubator, offering participants the chance to turn their ideas into start-ups. For this reason all concepts to do with risk analysis, costs, economic sustainability and the needs of end users will be a central focus of the jury's assessments.

Telespazio and Leonardo announce the winners of #T-TeC 2022

The awards ceremony of #T-TeC 2022, the Open Innovation contest promoted by Leonardo and Telespazio, was held today in Brussels in the frame of the 15th European Space Conference.

Telespazio has recently signed important collaboration agreements with two different Turkish companies, thus strengthening the relationship with the Country that began with the development of the Gokturk-1 satellite, launched in 2016.

With S-EDGE, drones serve the citizens

The design phase of S-EDGE, a European Space Agency (ESA)-funded initiative in which Telespazio led a team of companies comprising e-GEOS, TIM, ADPM Drones, SEIKEY and the Polytechnic University of Turin, and which saw the cooperation of the City of Turin, has concluded.

Telespazio and Leonardo announce the winners of #T-TeC 2022

The awards ceremony of #T-TeC 2022, the Open Innovation contest promoted by Leonardo and Telespazio, was held today in Brussels in the frame of the 15th European Space Conference.

Telespazio has recently signed important collaboration agreements with two different Turkish companies, thus strengthening the relationship with the Country that began with the development of the Gokturk-1 satellite, launched in 2016.

With S-EDGE, drones serve the citizens

The design phase of S-EDGE, a European Space Agency (ESA)-funded initiative in which Telespazio led a team of companies comprising e-GEOS, TIM, ADPM Drones, SEIKEY and the Polytechnic University of Turin, and which saw the cooperation of the City of Turin, has concluded.